Teller me the Truth: CommBank’s dirty laundry to finally get aired 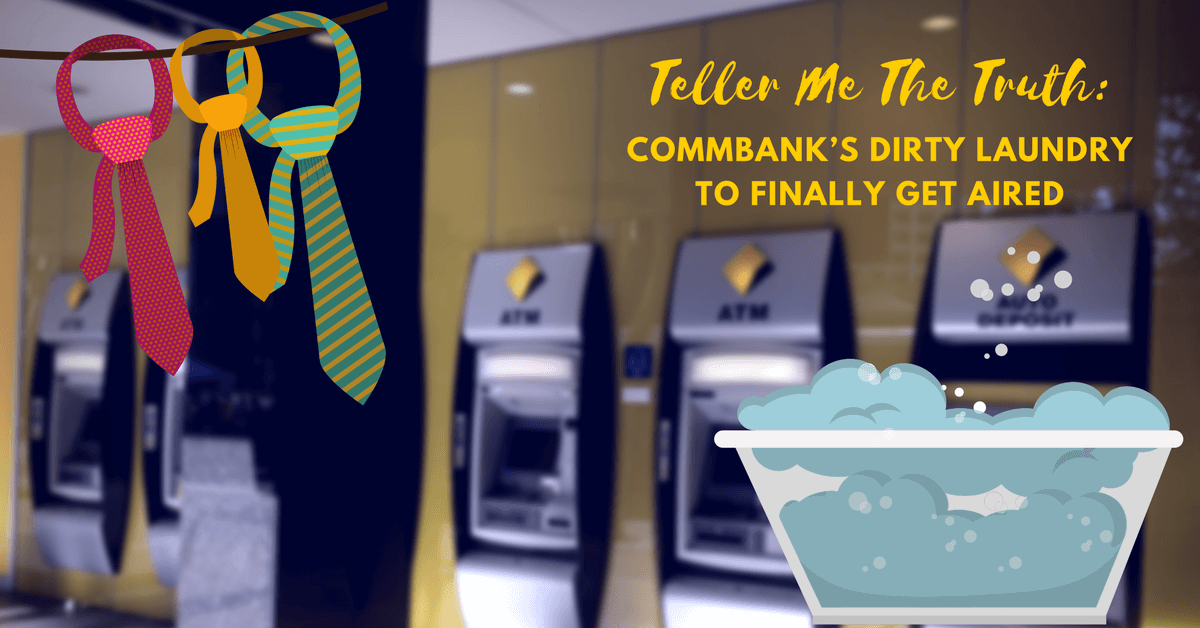 Lately the Commonwealth Bank has been getting smashed more than avocado on toast.

Since it came to light that the bank failed to notify regulators of more than 53,000 large cash transactions, CommBank has been raked over hot coals. Allegedly, their mistake enabled criminals to easily scrub their dirty dollars and launder it in offshore accounts. While the bank’s executives will have their exorbitant salary bonus trimmed, and the CEO is on the way out, the bank is blaming a computer coding error in the hope of avoiding a potential $1 trillion dollar fine.

The laundering issue is a genuine scandal, for sure. One of many for the bank. But if you’ve been stuck tumble drying in this corner of the news cycle, you may have missed the bigger CommBank story that broke last week.

What could be bigger than over fifty thousand unreported cash deposits potentially funding criminal and terrorist activities?

CommBank shareholders have just filed the world’s first lawsuit against a bank for failing to report on climate risk.

A corporation is (finally) getting sued over climate change

Guy Abrahams is an art consultant and valuer, Kim Abrahams a medical practitioner.

On 8 August, Guy and Kim lodged a Federal Court case against CommBank with lawyers from Environmental Justice Australia. They’re the first couple in the world to bring a case of this type against a corporation.

So why is this heroic couple are stepping up and taking Australia’s biggest bank to court?

“We bought Commonwealth Bank shares more than 20 years ago as an investment in our children’s future,” Guy said.

“We are deeply concerned about the serious risks that climate change poses to the environment and society. The bank should tell investors about the risks climate change will have on its business.”

Environmental Justice Australia’s media release digs into the legal basis for the case:

The claim alleges that by not disclosing the risks climate change poses to its business, the bank failed to give a true and fair view of its financial position and performance, as required by the Corporations Act. The shareholders also claim the 2016 directors’ report did not adequately inform investors of climate change risks.

The claim seeks an injunction to stop the bank making the same omissions in future annual reports.

The action raises concerns about the risks, including reputational risks, to the Commonwealth Bank regarding funding required for Adani’s proposed Carmichael coal mine project.

To translate from legalese to English…

Guy and Kim are bloody legends suing CommBank to expose how much they’re investing fossil fuels, and how much climate risk threatens their business.

Check out what Future Super staffer Michael has to say about it:

I’m assuming you have an interesting life full of fun activities.

So it’s understandable if you don’t spend your precious time on this beautiful planet trawling bank reports or reading the statements of finance industry watchdogs.

It’s almost like the finance industry deliberately makes itself as boring as possible to turn us off from taking a closer look.

Well, it’s time to wake up.

It’s no hyperbole to say the future of our species, and life on this planet, is in the balance sheets of the big banks and super funds that finance fossil fuel companies.

So in the following 3 points I’m going to try to connect the dots to explain what climate risk is, and why addressing it could be one of the most powerful solutions in the fight against climate change.

While you’ve been breathing, eating, sleeping, loving, studying, working, traveling etc, banks and super funds have been investing in the fossil fuel industries hell-bent on cooking us and the planet.

Here’s some stats to ponder:

Banks and super funds only invest in something if they think it will make money. That means they’re betting on a big future for fossil fuels.

But as anyone who’s seen the Big Short or lived through the GFC will know, sometimes everyone gets it very wrong.

Thing is, there’s a little problem with investing in the fossil fuel industry.

2. The world is moving away from fossil fuels

While big banks and super funds plough billions into fossil fuel projects and companies, basically every country in the world has signed up to The Paris Agreement. The Paris Agreement is a global commitment from 195 countries to do what’s necessary to keep warming below 2 degrees.

Well, newsflash, keeping warming below 2 degrees means keeping most fossil fuels in the ground. How do we know this?

A few years ago an organisation called Carbon Tracker did some digging (of the research variety). They wanted to find out:

The answer was astounding.

Up to 80% of current thermal coal reserves can’t be burned if we’re to have have a coin toss chance of staying below the 2 degree ‘safe’ limit.

That means that the fossil fuel industry’s business model (to find and burn as much coal, oil and gas as possible) is dangerous and fundamentally flawed. Not just for the people and planet bearing the brunt of climate impacts, but for investors, too.

Earlier this year, Geoff Summerhayes, executive board member of APRA, Australia’s finance industry watchdog, warned that climate change is a clear and present financial risk. He also said that company directors “who fail to properly consider and disclose foreseeable climate-related risks to their business could be held personally liable for breaching their statutory duty of due care and diligence under the Corporations Act.”

Geoff broke down the financial risks from climate change into physical risks and transition risks:

Transition Risks: changes in policy, law, markets, technology and prices that are part of the transition to a low-carbon economy

A big transition risk is that fossil fuels may become a ‘stranded asset’. A stranded asset is what you call something that’s worth a lot one day and very little the next.

Think about what happened to Blockbuster when Netflix took off, or the fax machine when everyone moved to email. Well, it could be happening all over again, but this time it’s renewables vs fossil fuels.

Where do we go from here?

What happens when the market realises thermal coal, oil and gas are too expensive, from an environmental, social and financial perspective?

We’re not waiting around to find out.

Future Super is Australia’s first 100% fossil fuel free super fund. Our approach to climate risk is to make sure our portfolio has no exposure to coal, oil, gas, and the banks that finance fossil fuels.

Super funds are designed to invest over long time horizons. When we look forward 10, 20 or 30 years, we see a world that’s increasingly powered by clean, renewable energy. So we’re investing in a renewably powered future, and that starts by being fossil fuel free.

If you’d like to join thousands of Australians investing their super in a safe climate future, find out more here.