5 Reasons to Care About Your Super 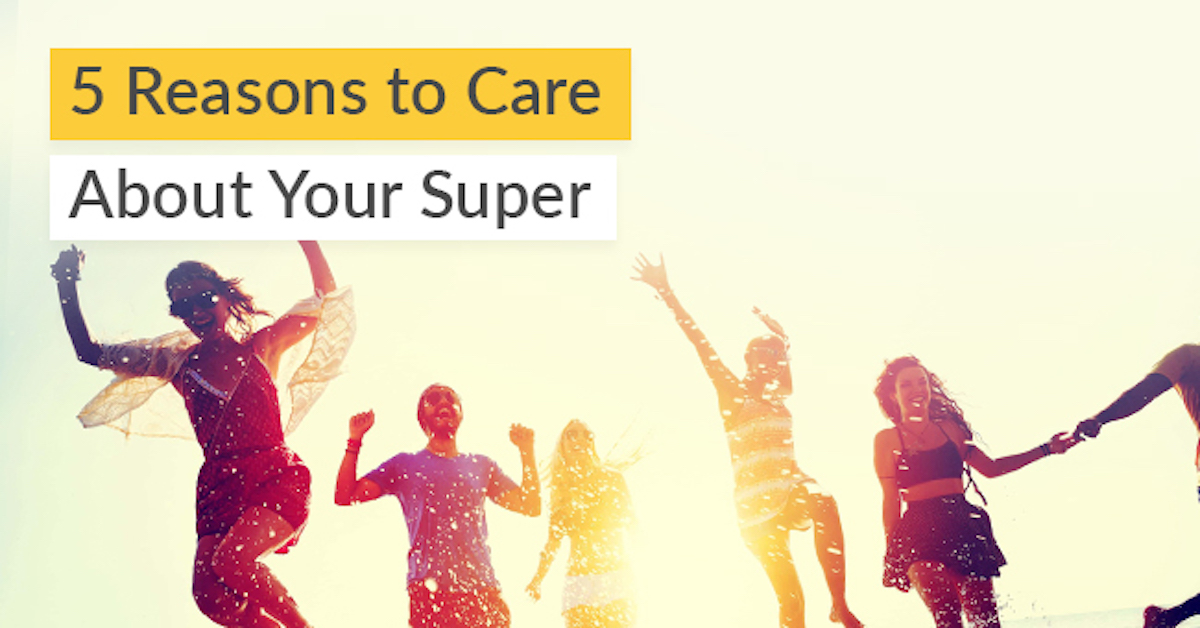 Whether your employer originally invested your super in their default fund, or you personally selected a fund based on recommendations from friends or family, you were making an investment for your future. But have you ever stopped to think how your super contributions are invested in the future of our planet?

Did you know that many super funds actually invest in some pretty terrible things? Your superannuation could be used to help prop up dirty oil, support big tobacco, or fund unethical manufacturing. Let’s find out why you should divest your super out of dirty, unsustainable industries and into clean and ethical alternatives.

Do you care about a sustainable future? Make the switch to Future Super in only 2 minutes.

Need a good reason to care about your superannuation? Reason number 1: Super is your money, so you should be able to choose where it goes.

Even though you can’t access it until closer to retirement, superannuation is money you earned that gets invested on your behalf. It can be easy to forget that super is your money, but ultimately, you have more control over it than you think.

While you don’t have much say over where individual superannuation funds choose to invest your hard earned cash, you can choose which super fund is right for you based on your beliefs and values.

Do you want to invest in a world with more coal mines, offshore detention centres and nuclear weapons? Or would you prefer your investment to support clean energy projects, technological innovation and medical advancements?

By taking the time to choose which super fund aligns with your personal values, you can play a part in changing how the world does business.

That’s not an exaggeration. According to the ATO, there could be as much as $14 billion in unclaimed super floating around in various funds. And because that super is unclaimed, the owners of that money probably don’t even know where it’s being invested. That’s a BIG reason to care.

How does this happen?

Beyond that unclaimed super, there’s also $8 billion sitting in super funds that haven’t received contributions in more than 5 years. Some of that super could be yours, and you could be using it to make the world a better place.

If you’ve been working for a few years and aren’t sure where all your super is, don’t despair - it no longer takes a 3-page paper form faxed to a government agency to find it. In fact, when you switch to Future Super, we can find and rollover your lost and unclaimed super in just the click of a button.

Rolling over your super isn’t quite this fun, but it’s certainly this easy! (And it will give you warm fuzzies just like this does).

By investing in clean energy, efficient transport and ethical businesses, super funds can help Australia build a future that’s more sustainable. At Future Super we invest in industries like:

Here are some companies that care about the environment

Not all businesses are the same. While some chose to ignore the looming threats of climate change and their impact on the environment, others are choosing to implement business practices that work towards cleaner energy solutions. Future Super is proud to partner with many of these businesses.

Spread across Australia, NEXTDC is a data centre business firmly on the pulse of modern technology. Not only do their data centres host telcos, government agencies and businesses of all sizes, their Melbourne 1 data centre was the first in Asia-Pacific to use solar power, and is Melbourne’s largest privately owned PV solar array. Here’s an article we wrote recently about these great guys.

The brainchild of entrepreneur Elon Musk, Tesla’s changing the face of energy usage across the world. With their award winning electric cars and plans to bring automated driving to the world, their acquisition of SolarCity, and their innovative new solar roof tiles - Tesla is truly on the cutting edge of climate-positive innovation.

With a strict policy against financing greenhouse gas pollution projects, Teachers Mutual is one of Australia’s largest mutual banks with a strong commitment to remaining fossil fuel free. Their positive and humanitarian approach saw them voted one of the world’s Most Ethical Companies in both 2014 and 2015. We are proud to invest in such a forward-thinking company - and you should be too.

4. And put a stop to unethical business practices

Where your super is invested can greatly affect how successful businesses and industries are in Australia and abroad. As long as we continue pouring money into unethical industries, the longer they will thrive.

Whilst the question of ethics is complex and multifaceted, these are some investments that we consider unethical:

It’s no question all these things are bad. That’s why we don’t invest in them.

Want to help heal the planet and put a stop to the things listed above? Start with switching your super.

5. Ethical super safeguards your future and your retirement

Super in Australia is mandatory - and for good reason. Many Aussies underestimate how much money they need put aside for retirement, or might not even think about it before it’s too late. However, once you hit retirement, your main income streams may stop or reduce, so it’s important that you have a healthy nest egg put aside to cover your retirement.

While some investors might think that willingly screening out certain industries due to their unethical practices would result in inferior performance compared to an all-inclusive fund, history indicates this is not, in fact, the case.

Between 2014 and 2016 core responsible investment funds in Australia doubled - from $25.6 billion $51.5 billion in assets under management.

In fact, the Responsible Investment Association Australasia reported that in 2016, responsible investment funds outperformed other funds in a number of key areas.

A high performing super fund is only half the equation. You also need a sustainable and healthy world to retire to. After all, your superannuation won’t mean a thing if the planet is a wreck.

By caring about where you invest your super, you’re not only getting better financial return from your superannuation, but also investing in businesses and enterprises that safeguard the future of our planet. Want to grow your nest egg AND save the planet at the same time? It’s a no-brainer.

Now is the time to care about your super 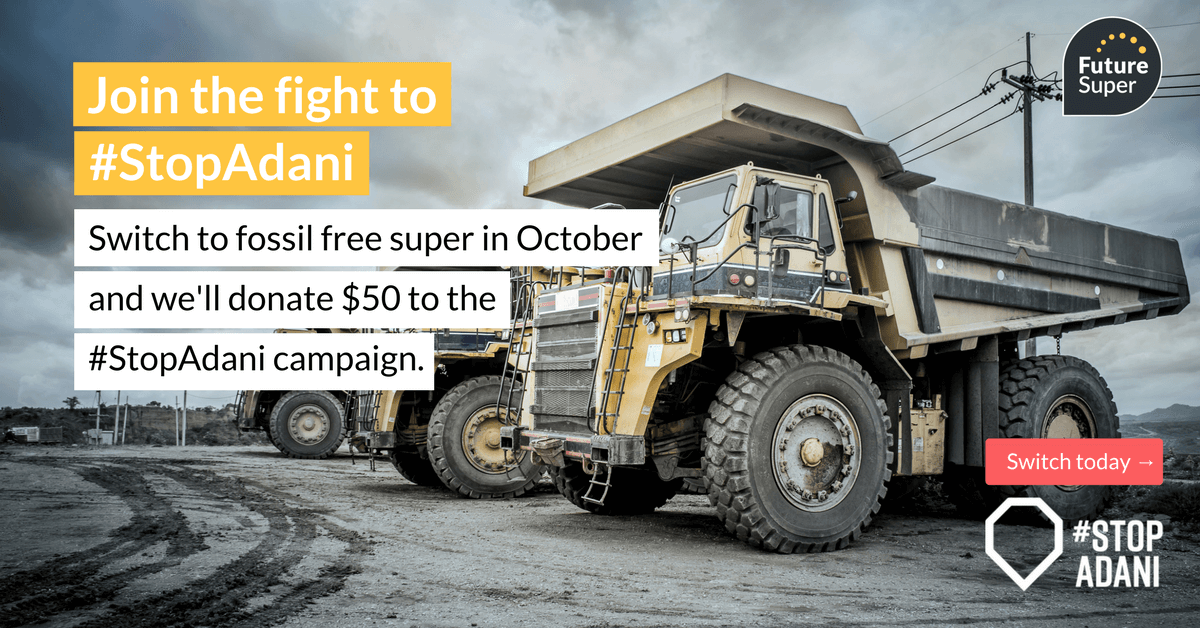 There’s never been a better time to switch to an ethical super fund. That’s why we’re partnering with Who Gives A Crap - 100% forest friendly toilet paper so soft it will make your bottom smile. Switch to Future Super during the month of October and we’ll donate $50 to the #StopAdani campaign* for everyone who switches on the day. And if you convince a friend to join too, you’ll get a box of environmentally friendly toilet paper^. Not only will you be using your investment to support ethical and progressive industries, you’re making a better choice for your future (and your bum).