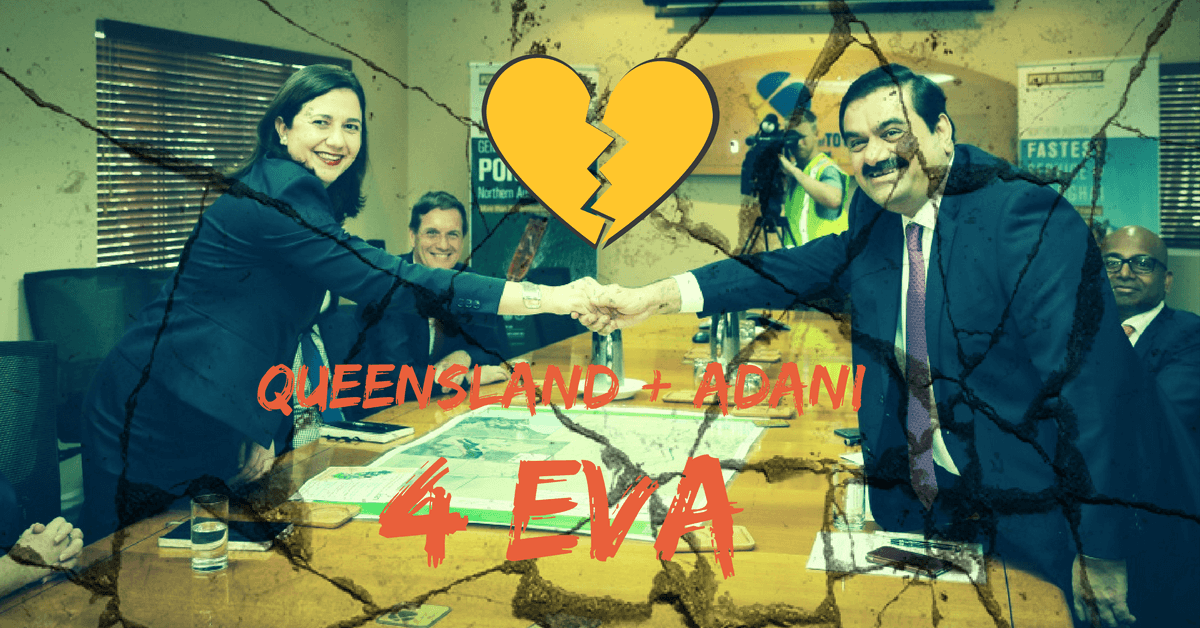 With the latest news that Commonwealth Bank has ruled out funding the divisive Adani Carmichael mine, adding their name to a list of big Australian banks refusing to fund the controversial project, there's very little indication from our government that they're listening to what their constituents, and even now the finance industry, are saying...

As a Queenslander, it disturbs me deeply what our government is agreeing to in our name, in considering an allegiance with Mr Adani to be in our state’s best interest.

Their strongest argument is that this new coal mine will “bring new jobs”.

Putting aside the fact that Adani’s claims about job creation are greatly exaggerated, what seems to be missing from the argument is that new, clean technology brings jobs, too. In fact, in February this year, CleanTechnica reported that clean energy jobs surpass fossil fuel jobs in the US by 5 to 1. The clean energy revolution brings endless opportunities.  If we turn our attention to it properly Australia could become a world leader in creating green industries generating up to a million green collar jobs by 2030 and multi-billion dollar export opportunities in green technology. There’s no excuse not to go down this path.

But there are so many reasons (not the least of them being the economic reasons) not to go down the other path. That dark, scary path with thorny brambles overhanging. It screams danger. It screams death. It screams irresponsibility.

And it is irresponsible. Deeply. But what strikes me strongly today is this primal sense that we are the ones being played for fools.

I can’t be the only one thinking this

Perhaps it’s the underdog mentality that’s part of my North Queensland upbringing. Perhaps it’s the subtle cynicism toward government that comes from growing up in a family who attended every rally, reconciliation day, earth day, walk against want and Amnesty march in our small town. Perhaps it’s my primary school memory of our leaders choosing the word ‘reconciliation’ instead of just ‘sorry’. Perhaps it’s the general distrust that comes with being a passionate advocator of human rights and climate justice in a world that often seems to be ignoring us.

Whatever it is, there’s this indignant voice in my mind, as I pass the GetUp! billboard about the Adani mine on my way to the train station, that tells me in no uncertain terms, “Queensland is going to look like such idiots for doing this.”

The building blocks for a fool’s errand

It’s not hard to picture the scenario broken down into simple pieces.

An industry that has no purpose in our planet’s future. With smarter, cleaner, more economic alternatives rapidly gaining ground, redundancy in the energy mix is creeping ever closer. (Think Sony’s walkman world as the iPod emerges. Think the taxi industry as Uber becomes the norm.) To refuse to evolve is certain commercial death. Yet stubbornness, pride and fear take hold and feet get stuck in the mud.

A billionaire who's losing his grip on his business during changing times. There’s not a great future in the coal industry. That little black rock has served it’s purpose. Sure, it was great in the days of steam trains and fire places (when we didn’t know any better). And the threat of a lump of it in a festive stocking was enough to get the most belligerent kids to behave for a week. But it’s an old technology. An old, dirty technology. And I can’t help but think that someone who’s staked their fortune on this fast-becoming-redundant rock must be feeling mighty threatened at this point in our planet’s history.

A group of suckers who can’t see past the end of their nose. Jobs are great. But aren’t jobs that last more than 10 years even better? Especially if it’s going to cost the state billions to make those 10 year jobs in the first place? This mine only has a finite number of years. The figures just can’t stack up. So what happens to all those people who moved to the middle of nowhere, who uprooted their families and their lives, who staked their whole future on this ‘exciting new venture’? What happens to them if it all goes belly up?

I can just see Mr Adani sitting behind his desk thinking, “I just need one group of idiots to fall for my beautiful powerpoint slides with their classy clip art. I just need one fool to say ‘yes’. I just need one sucker to let me build it in their backyard. I’ll worry about the future when I get one more coal mine.”

We fell for it.

“How could you and your generation let that happen, Mum?”

I know that’s what my 4 year old daughter will be saying in 10 years when it all comes unravelling. And that’s what I’ll have to say. “Our government fell for it, honey. They fell for it. Hook, line and sinker… Sorry.”

But even ‘sorry’ won’t cut it by then. When natural disasters are the norm, year in year out. When the insurance premiums are so high that we have to pull our kids out of their weekend sport teams or coder camp. When the global death and displacement count due to climate change is tick, tick, ticking ever higher.

So… how do we stop it from happening?

We stop it from happening.

What I can do, what you can do

We move our energy provider to one that offers genuine green options.

We warn our banks that we will move our money if they continue funding coal, or consider funding new coal.

We switch our retirement savings out of coal, oil and gas to make a statement that we will no longer let our money fund harmful industries.

We rally. We write. We call.

We make our voices heard.

We stand together, side by side, saying ‘No. Not in my name’.

We find our inner activist who's been a little pre-occupied with life lately. We remind her that this is one worth fighting for. That it’s our backyard. That it’s our children’s future.

We pencil in half an hour on the weekend to write an email to our state MP. We sign the petitions that are making the rounds. We call our local member to voice our sincere concerns.

We don’t sit still. We can’t. That’s the worst thing we could do.

But if we all stand up, they’ll take notice. They’ll have to.