Why Coal is a Dying Investment 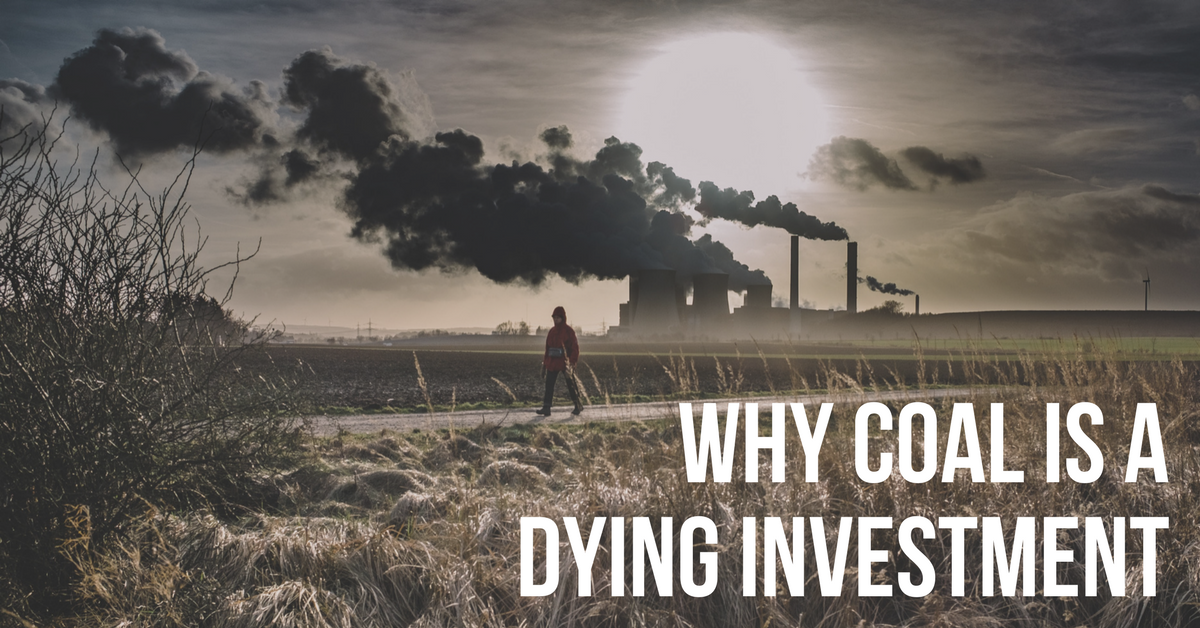 In 2016, global investment in clean and renewable energy accounted for $227 billion, almost double the $114 billion invested in fossil fuels.

The verdict is in. Yet in Australia, the push for coal investment continues from certain quarters. Find out why this push is doomed to fail, and how you can play a part in a cleaner future through ethical investment and superannuation, and why Australia can no longer ride the wave of one of the world's dirtiest energy sources.

Steer clear of dirty fossil fuels and make the switch to Future Super. It only takes 2 minutes.

The price of carbon is more than zero

Occasionally, a study comes out stating that coal is the cheapest form of energy (cheapest doesn't mean best, cleanest or even most efficient).

This was the case with CO2CRC, a company that is developing technology to store and capture emissions. This study, described as one of the most comprehensive, comes with a critical flaw: the carbon price is set to zero.

Why is this a flaw?

Carbon emissions have a cost. Think:

To be fair, CO2CRC does try to account for it in their future predicting that coal prices will go up based on the introduction of an Emissions Trading Scheme. But this skirting of facts does highlight the importance of casting a critical eye over reporting on renewables vs fossil fuels.

Regardless of whether the coal industry or government acknowledge that carbon emissions have a cost, we only have to look at the negative effects of carbon emissions and their relationship to climate change to understand why coal is dying and how urgent it is for us to address that.

Renewables are getting cheaper

As technology and economies of scale improve over time, the costs of establishing the renewable energy sector decrease, meaning that improvements in technology will reduce the price of renewables more so than coal in the years to come.

Research has estimated that from 2020, the weighted average cost of capital for coal will be 15%, compared with 7% for renewables.

This is just one of many factors making renewable energy more cost effective for future Australia.

We should keep in mind that coal has been around for a long time. Not only have we become 'better’ at removing coal from the ground, we’ve also found ways to streamline the infrastructure, leverage government lobbying, and reduce labour costs.

In any industry, new technologies require research and development. This means an upfront investment in time and resources for a future gain. Simply put, 'pro-coal’ arguments rely on the obfuscating view that coal is, right now, cheaper to produce. As we now know, that's only because:

Why do so many in the government support coal?

Lobbying by the coal industry is an effective strategy for changing the hearts and minds of people in power. In Australia, a select few have gotten extremely wealthy exploiting our shared natural resources. This means they have access to funding to lobby both governments and communities.

In Australia, it is common knowledge that there is a constantly revolving door between mining/energy companies and staffers from Australia’s major political parties. In 2015, Anne Davies from The Sydney Morning Herald uncovered a web of influential networks that connected NSW Premier Mike Baird’s office and Tony Abbott’s office with energy companies such as Santos and AGL.

Fossil-fuel interests have backed climate denial around the world for decades, and in the case of Australia, this only continues to happen with Adani. The recent Queensland election has already exposed the public’s unfavoured opinion of the Carmichael mine – so perhaps it’s time that the pollies listened to the public, rather than selfish, pro-coal lobbyists?

Demand for future coal is overestimated

China is the last big market for coal, and coal exporters around the world are all desperately competing to secure contracts with China. True, the twenty year boom in coal prices between 1990 and 2011 was largely driven by China (with India in a distant second place), but it’s also true that this Chinese boom is coming to an end, and the pollution created by their over reliance on burning fossil fuels is actually costing the country billions.

Goldman Sachs analysts believe the demand for coal will drop considerably over the coming years, declaring:

The prospect of weaker demand growth (we believe seaborne demand could peak in 2020) and seaborne prices near marginal production costs suggest that most thermal coal growth projects will struggle to earn a positive return for their owners.

Investing in new coal projects is just plain irresponsible. Coal is dying, and Australia needs to look at better options if we want to see a return on investment.

A clean Australia is a happy Australia

In Australia, 87% of our electricity comes from fossil fuels. That’s among the highest levels of fossil fuel generation in the world.

Many coal advocates position themselves as champions of GDP, jobs and productivity. However a clean Australia is better for productivity than a dirty one. As reported by the Sydney Morning Herald, a reduction in dirty energy means:

While governments talk a big game when it comes to protecting our environment, their actions speak louder than words. Coal is doomed, and you can help make a difference by rejecting coal investment and investing in programs that support sustainable, ethical business.

Let's talk about ‘jobs and growth’. This catchphrase that’s often trotted out by certain politicians as an excuse for supporting more dirty coal mines just doesn’t hold up. After all, if you really care about jobs for Australians, you’d reject an industry sector that is actively undermining the jobs of many Aussies.

According to Tourism Australia, Australia is the highest rated destination in the world for nature. People around the globe visit our country for its natural beauty and spectacle. If we can’t preserve that, we’re going to lose visitors, placing pressure on the tourism industry and leading to losses in jobs across a number of sectors that rely on visitors to Australia.

Simply put, coal is a bad investment. Even if it’s cheaper right now, which it barely is, the long term effects of digging up the earth to pollute the air simply aren’t worth it.

Australian culture shares a strong relationship with the natural beauty and wonders of the land. From beaches and the barrier reef, to unique rainforests, deserts and bushlands, there is really no place quite like Australia.

An ongoing commitment to goal is made when you consider the problems it causes. We have the opportunity to embrace renewable energies and secure a world we actually want to live in.

While governments and big coal might think only in the short term, the rest of us can make decisions that benefit our future. Invest your superannuation in an fossil fuel free super fund like Future Super, and watch as your contribution helps change the world for the better. Find more about our ethical investments and make a commitment to move away from big coal today.